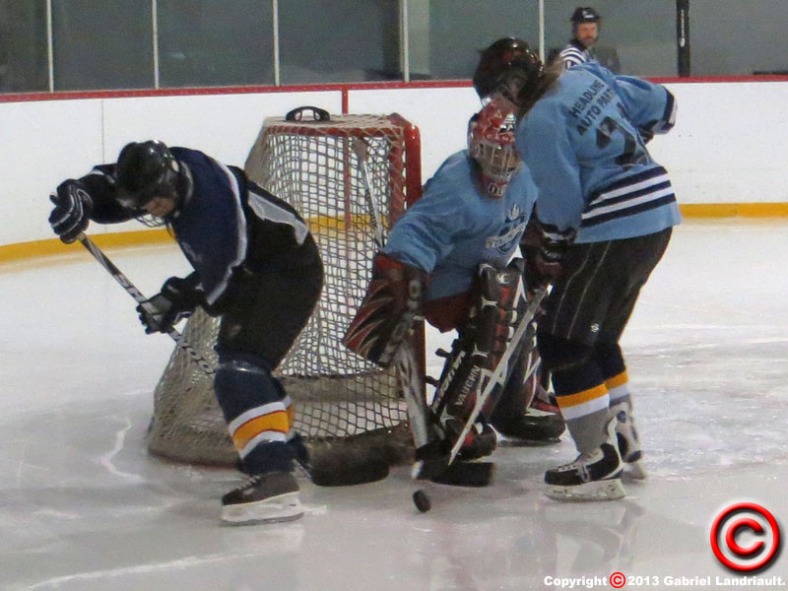 I took this shot a few weeks ago, at the ‘Pond Rocket 4 on 4 Hockey Tournament’, held at the Vankleek Hill Arena. Somehow it ended up in the paper… somehow = they paid me to take photos of the event, and this was one of the better ones, so they included it in the montage.

It took a few years, but I finally figured out how to shoot in that building. You’re less likely to get a blurred out action shot if the action taking place is coming at you, not flashing past you. So, for this one, I stood close to the corners, and shot the players as they crossed the blue-line, or when they were close to the net.

Also ‘somehow’ because there was an inch of dirty, scratched hockey glass between me and the players… and the lighting in that arena sucks beaver ass — there’s no direct lighting behind the nets. So just the fact these three figures can be identified as human is testament to the brilliance and skill of the people who designed and manufactured my camera.

So, big props to the 85,000 men and women living in the ‘Huizhou Dayawan Economic and Technological Development Zone’, in Huizhou, China… thanks for assembling my Canon SX240HS, and please tell your industrial bosses to stop raping Tibet.

One thought on “Rocket women”