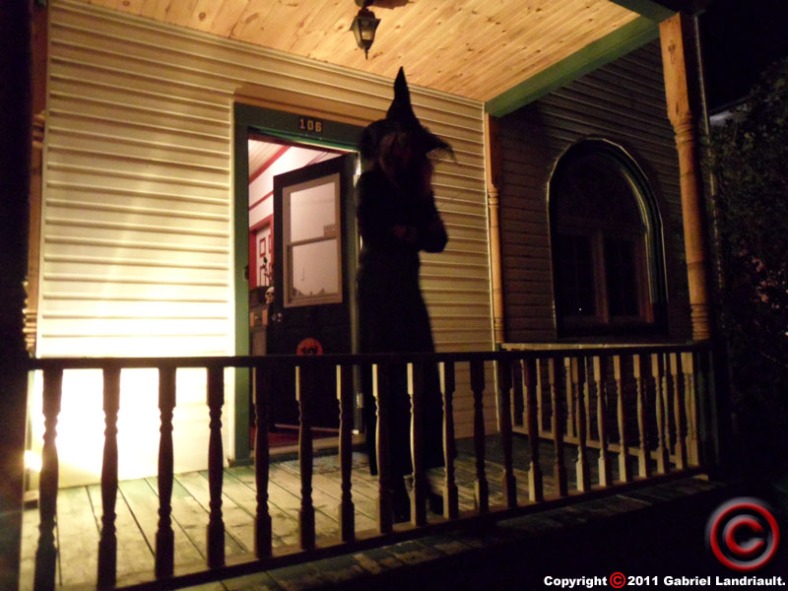 This witch is Dorothy Hodge, someone I’ve known for a long, long time. She works for the local paper, and runs a part-time photography studio called The Black Tulip Studio.

She’s not really a witch, she just looks like one on Halloween.

Dorothy was one of the last stops we made that night. We only really did two streets, Stanley and Higginson, but Andrew — my girlfriend’s nearly six-year old — managed to collect almost a garbage bag of candy dressed up as a green haired clown.

Victor, who will be two-years old in a few weeks, did all right as well. We dressed him up as a pumpkin, and his little pumpkin candy-collection device was full after only four or five stops.

It’s frightening that Victor already knows what candy is, or maybe it’s that he knows what free candy is. I have a great photo of him from last year, when we dressed him up as The Joker, he has a giant chocolate bar in each hand, and his face is just beaming.

Now that I think of it, Victor and Andrew each have three events within six weeks where all they do is collect free stuff — Halloween, their birthday’s and Christmas — that actually costs us a whole lot of money.

We might be able to afford it all if we give up food and paying bills. Or we could go pagan, borrow Dorothy’s hat, and tell the kids we’re so deep into Wicca we don’t celebrate Christian holidays like All Hallows’ Eve and Christ’s Mass with candy and $40 Transformers toys.

In our house we celebrate these days by giving mommy and daddy a huge break and playing in your room quietly. And maybe cleaning up the bathroom.

2 thoughts on “The witch on Higginson Street”