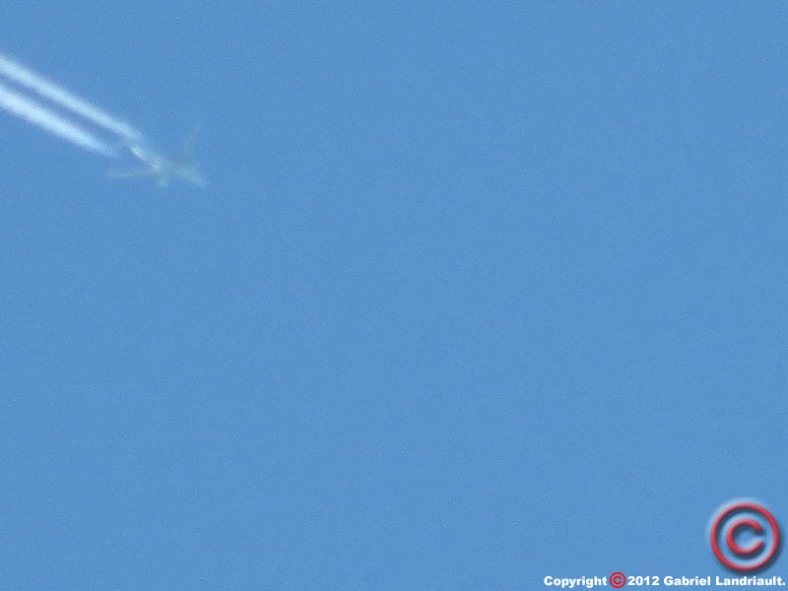 I shot a plane with a camera that could fit in my shirt pocket… if I still wore those. That thing is flying at 33,000-feet, and my camera has a lens that’s roughly the width of a quarter.

Sure it looks like a ghost plane, but if you ever had any doubts satellites could tell the difference between a freckle on the back of your neck, and a blackhead, this should shatter them.

I’m not even using a freaking tripod, which doesn’t seem fair. My Canon SX240HS comes with a 20x optical zoom but, surprise, it also has an 80x digital zoom. Plus it has the dual stabilization feature… I’m still not sure what the ‘dual’ part is, but it does work.

Which you can see, because that’s an unedited, clear and clean photo of a jet, flying at 33,000-feet, taken by a tiny camera with a small lens and no freaking tripod. And my hands shake.

Again, none of this seems fair.

…by the way, if I don’t post for a week or two I’ve probably been ‘relocated’ because of that ‘shot a plane’ joke. I’m sure, wherever they send me, the locals are treating me with the respect and kindness they’re known for.