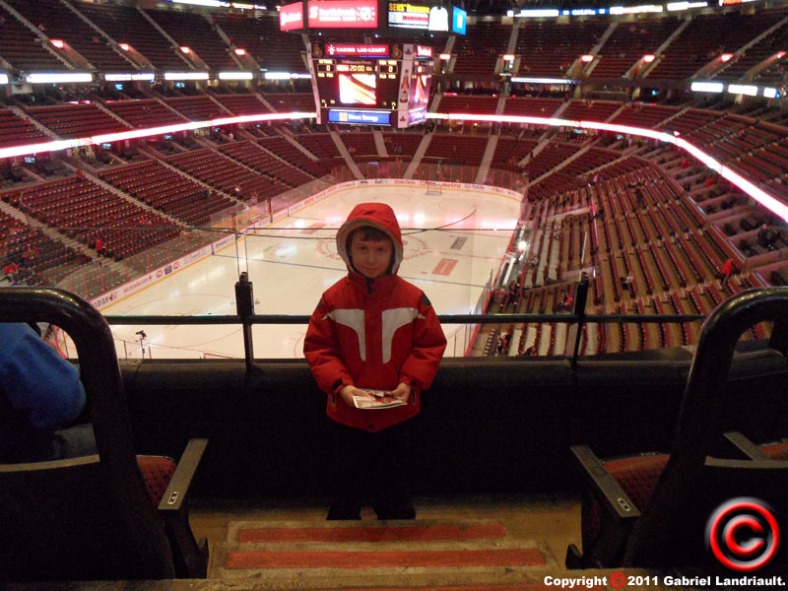 Andrew, my girlfriend’s oldest son, just turned six-years old, so I figured that’s the perfect age for something big. And there’s not much bigger than a kids first NHL hockey game, especially if it’s the first one.

And I figured right. We took him to see the Ottawa Senators take on the New York Rangers and he had a blast. On the way in we told our usher it was Andrew’s birthday, so during the second intermission one of the rink people came over and gave Andrew an envelope stuffed with stickers, balloons and a card signed from “The Senators”.

His mom also bought him a Senators Santa-style hat, a foam finger, popcorn, a Senators puck and a 20th Anniversary Senators cup. Andrew also got a huge hug and an autographed photo from Spartacat, the team mascot.

All I got from my first game was a ticket stub. But I did get to sit in the Montreal Forum, right behind Ken Dryden, and Guy Lafleur scored a goal. So… I win.

To be honest, I was impressed he actually watched the game. I wasn’t expecting that, I was expecting the exact opposite. Mostly that he’d want to sprint through the halls, or he’d get bored and start poking the people in front of us with his foam finger, or that he’d pull out some firecrackers and set a player on fire.

But when the Senators scored their two goals, Andrew popped out of his seat as quickly as I did, and even gave a little yell with his arms straight up.

He even said “oh man” each time the Rangers scored their three goals. He even, bless his heart, gave me a play-by-play of how each goal happened.

In all of the excitement of not having to chase him around the arena, I totally forgot to take pictures of the game. I really wanted one of Andrew with the players (not on fire) in the background.

The best thing about having a first of anything, of course, is there’s always a next time.

One thought on “Taking Andrew to his first hockey game”