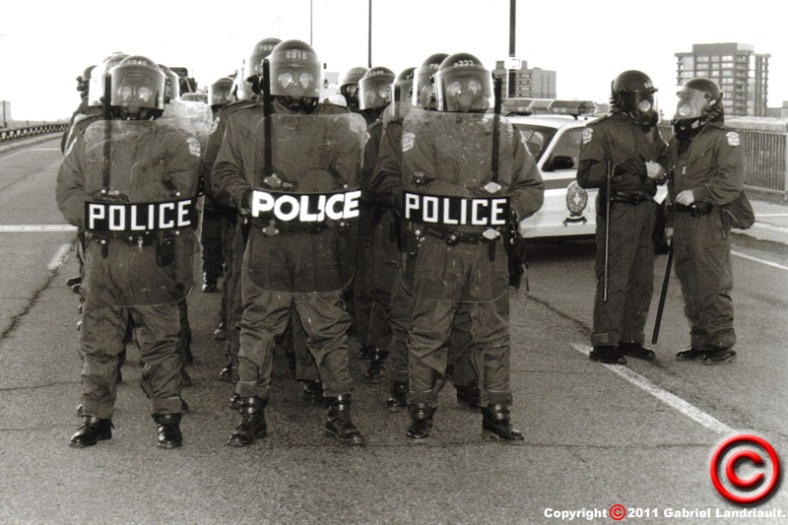 These are the Quebec provincial police, otherwise known as the Sûreté du Québec — little known fact, they are the only police force to ever charge me with a crime.

I showed up, by accident, at a 1998 protest with one roll of B&W, and one colour roll. Which is totally inadequate to shooting a three hour bridge standoff. On the other side were 200 Quebec contractors showing a remarkable amount of non-violent restraint.

It ended peacefully, with about ten arrests, but not before the City Cops showed up and beat on a few people. A few of the cops got stomped on back, which was funny.

The great thing about cops at a protest is they make great photo subjects, especially if they’re stomping people. In Ontario the law is absolutely clear that anyone in a public space is fair game to have their photo taken. That means no to shooting into the window of a private home, but yes to shooting on a bridge full of cops.

Protesters might not know that, most of them being university students and unable to read more than 140 characters a day. So the guaranteed, hassle free shot of any protest, is the guy with the Taser and gas mask. Get as close as you want, just no touching.

I used a flash, something I wouldn’t do today. I was most likely using Kodak’s 400 T-Max, but I didn’t do my own developing.